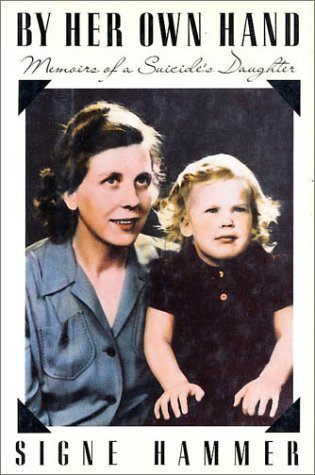 By Her Own Hand: Memoirs of a Suicide’s Daughter

I'm very young, my first time at the theater. Mary Poppins has taken the Banks children to tea at the home of some friends of hers, and while they sit on the late-Victorian furniture it rises, gently, toward the ceiling. The Banks children's eyes bug out, my eyes bug out, the production is a hit. And they eat real fruitcake.

I know the fruitcake is real because we go onstage afterward and I take a good look at it. It immediately suggests to me the possibility of a whole life onstage, where everyone could see me but I would be set off from them, in a magical space where I could perform magical acts, like flying. Yet I could eat real fruitcake. The image dazzles.

At home I immediately start to draw pictures for plays, hanging the pictures up on my little red wooden wheelbarrow and delivering the narration, like a slide show. As soon as I learn to write, I become the school playwright and star performer. At will I can change my geography, my time, my family, my age, my sex.

When I was nine, though, something happened that put an end to this activity. In the spring of 1950, right before Easter, resurrection time, my mother decided to go in the other direction. She committed suicide.

Her method was simple and effective. One night, when my father was away and we children had gone to bed, she set up the ironing board in front of the open oven, turned on the gas, lay down on the ironing board, and waited for the gas to do its work.

I don't know how she got herself onto the ironing board; she was five-foot-six or so, according to one photograph I have in which she is posed in front of a measuring scale, probably for an army PX ID. I don't actually remember the ironing board; it is a detail supplied by one of my brothers, in the only conversation we ever had about our mother's death. We were adults by then, and he had had a few drinks, so I suppose it is the truth.

At some point after she lay down, and probably after she died, there was an explosion; she had forgotten, apparently, to turn off the refrigerator, and some spark ignited the gas. Or was that part of her plan, to dispose of the gas so none of us would be overcome by it when we found her?

She hadn't wanted to take me with her. My room, tiny and high-ceilinged, was right above the kitchen, in the back of the house. There was an old-fashioned iron grill in the floor to allow warm kitchen air to flow through. It had been covered over because I couldn't sleep with people down there clattering dishes and arguing, but she must have wanted to make sure. So when it was time to go to bed she asked me whether, as a treat, I wanted to sleep in the guest room, in the front of the house next to the room she shared with my father.

She knew I would accept. I hated my room, set apart from everyone else's. My three brothers slept in a cluster of bedrooms on the third floor that we called the boys' dormitory. It had been a few years since I had been so frightened by my nighttime isolation that I had braved the black wells of the back and front stairs to get to the safety of my parents' bed, but I still loved sleeping in the guest room. It felt like I belonged somewhere, with people.

When she came to tuck me in that night she hugged me long and hard, wrapping her arms around my shoulders and lifting me up to her. She held me as if she were reminding herself of what it felt like. When she went back downstairs, she left the door open a few inches so I could see the light from the hall.

The explosion hit my sleep as a sentence in a dream: "The books fell on the floor." I woke up hearing my brothers pounding down the back stairs, caught a glimpse of flying pajamas. I went wide-eyed next door, and saw that the bed was still made, as if it were daytime. I knew something was all wrong, and followed my brothers down to the kitchen.

Erik was out in the driveway yelling FIRE!, his voice cracking a little in panic. Hal was in the kitchen, standing over my mother, feeling for a pulse. She was dressed in her old brown house slacks and a red sweater.

I walked several hesitant steps into the kitchen, over ash that had been paint, seared from the ceiling and cabinets. I noticed a little blue line of flame along the wooden counter. That must have been the moment I knew my mother was dead, because I stopped, backed up, and stood in the doorway, unable to move.

By Her Own Hand:
Memoirs of a Suicide’s Daughter
“A fascinating and disturbing memoir...subtle, lucid and complex.”
--New York Times Book Review
Passionate Attachments: Fathers and Daughters in America Today
Every woman’s first, most influential relationship with a man.